Death to the Doorknob! Vancouver ban on the humble doorknob.

Death to the Doorknob! Vancouver ban on the humble doorknob.

New regulations in BC will see that no doorknobs be installed in new homes. It is also recommended that old doorknobs should be replaced with lever handles at the appropriate time. Doorknobs are the round handle you turn to open and close doors. Replacing the doorknob will be the lever handle. This is part of a regulation shift aimed at increasing accessibility. Other changes include wider stairways, first floor bathrooms, and higher outlets.

Most doorknobs have a spindle running through them that draws the latch when turned. The latch disengages from the doorframe allowing the door to swing freely. The doorknobs can be seen in Egyptian paintings dating back to 5000 years ago, however; this would have been a luxury of the upper class. At the beginning of the Middle Ages people lived in one big room. These big rooms began to be divided into smaller sections that used hides as door flaps. Metal hinges and wooden doors were later bolted into the stone foundations and used a latch to open and close the door.

Development in the doorknob exploded during the 1900’s when 100’s of patents for doorknobs were issued. Doorknobs were initially made out of food but quickly shifted to hollow metal as technology developed. Doorknobs became decorative ‘showpieces’ for homes. It was considered luxurious to have a doorknob made out of ivory, china, or clay, bronze, or brass. In 1909 the founder of Schlage, patented a door lock that turned lights on and off. Doorknobs were quickly fitted with a cylinder locking device, allowing people to use the doorknob to lock their door. Doorknobs occasionally resurface in the media as hot spots for germs and bacteria. Doorknobs in public areas can often be handled by hundreds of people in a day. 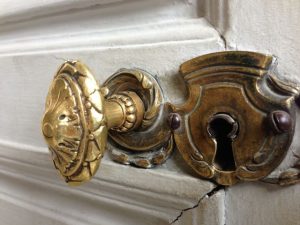 Locksmiths have been ahead of the game in phasing out the doorknob. We recognize that lever handles are not only more accessible for everyone, but also safer for everyone. In an emergency situation, lever handles are easier to open than door knobs. A disabled hand can hamper your ability to twist the knob, but will not disable you from depressing the lever.

The doorknob has had a long history with humanity and although we move into a post-doorknob era, we will not forget the need that doorknobs will in our lives. Lever handles bring the legacy of the doorknob to everyone! The new regulations officiating the death of the doorknob took effect at the beginning of 2014, initiating a move towards increased safety and accessibility that locksmiths have been doing for years. 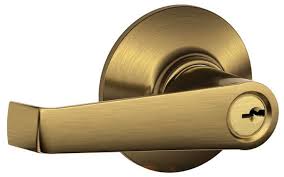 Mr. Locksmith 24hr Mobile Locksmith service vehicles are well stocked with a  range of lever locks for installation on your house of business. Also, we can rekey the new locks to your existing keys.