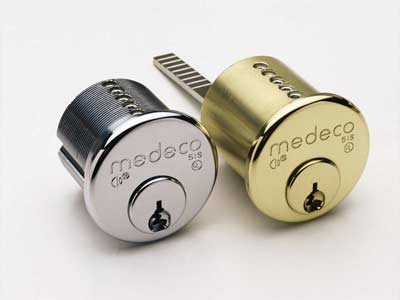 When it comes to the most commonly used type of lock in general commercial situations, the lock of choice can be a mortise cylinder lock. Its design consists of a threaded body and is perfect for use on business front doors constructed of aluminum or glass. These locks are installed on existing door entryways with little to no problems. The primary reason why mortise locks are so often utilised has to do with the fact that they act as a combination of lock types. By being ‘dual action’, they can act as both a deadbolt and a doorknob.

In this case, you will need to remove the current, existing mortise cylinder as your first step. Just access the hex screw on the side of the door and then back it out approximately ¼ to ½ inch. At that point, you can unscrew the existing mortise cylinder by partway inserting the lock’s key and turning the mechanism clockwise. Once you’ve managed to remove the old lock, merely screw in the new one. The main consideration at this point is ensuring that new lock is facing up correctly when you’ve screwed it in. You’ll also want to try the new lock’s function before you complete the job by re-screwing the hex screw.

However, it should be noted that while replacing an existing mortise lock is relatively simple, the initial lock installation is not something that will usually be handled by an average homeowner. The reason for this has to do with the fact that an initial installation requires the knowledge and use of woodworking tools and can be pretty labor intensive. Even if a mortising jig is used, in order to simplify the installation, there can still be problems when it comes to the installation of the external trim.

It should also be noted that while installing a mortise lock can actually weaken a timber door’s structure. However, it is superior to a bored cylindrical lock both in strength and versatility. This is because, unlike the bored cylindrical lock, the mortise lock has the ability to utilise a more solid internal mechanism and a heavier return spring. Another advantage revolves around the mortise lock’s ability to accommodate a relatively wide range of different manufacturers’ cylinders/accessories.