Door repair after a Break and Enter attempt

As a city  Vancouver has one of the highest property crime rate in Canada and break and enter attempt happen every day.

The most common time for residential break and enters to occur is on weekday mornings and that 90% of the cases the point of entry is a door. This attempt of break and enter was no different.  Thanks to the high quality Abloy Lock the attempt was unsuccessful, the door however was damaged and needed repair.

Michael Lee , our East Vancouver locksmith, who has originally installed the lock was called for help.

Michael has installed strike plates on the door which help achieving two purposed – covering the damage and strengthening the door against any future attacks. 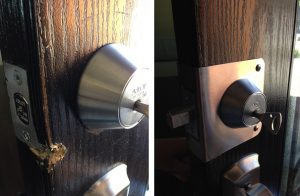