The Melting Clock by Salvador Dali is called the Dance of Time I, the bronze sculpture is more than two metres high but will seem even taller on its 60 cm plinth. Dalí, who died in 1989, remains one of the 20th century’s most recognizable figures both for his distinctive Surrealist paintings and sculptures, but also for persona as a celebrity artist. 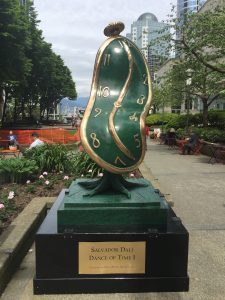 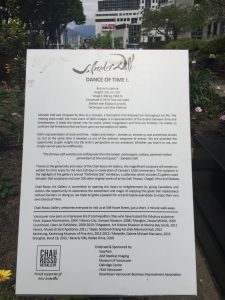 Dalí Melting Clock in Downtown Vancouver Dance of Time I, the bronze sculpture is more than two metres high. 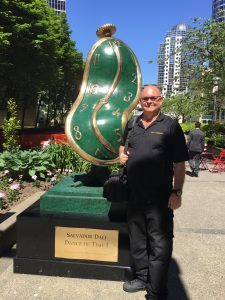 Dance of Time I, the bronze sculpture is more than two metres high

The sculpture is located in the mini-park known as Lot 19 at West Hastings and Hornby.

A melting clock is probably the one image most often associated with Dalí. Three melting clocks — as well as a stopwatch covered with ants — first appeared in Dalí’s figurative and dreamlike painting Persistence of Memory in 1931. For Surrealists, soft clocks referred to the relativity of time and space. For Dalí, symbols had a very personal meaning and often related to how he thought about objects and their ‘hardness’ or ‘softness’. He said he was inspired to create soft clocks after seeing melting Camembert cheese during a meal.

Dance of Time I is the sixth of eight sculptures made from the same mould. Although the surface of bronze can oxidize to create a green patina, the green on Dance of Time I is from an applied enamel paint. If you look at the numbers on the face of the stopwatch, numeral 6 at the bottom is missing. Dance of Time I was cast in 1984 and is valued at $750,000. It is owned by the Stratton Institute, a non-profit organization based in Switzerland.