Commercial Drive is a roadway in the city of Vancouver in British Columbia, Canada that goes through the neighbourhood of Grandview-Woodland. However, the neighbourhood is so dominated by the businesses, cultural facilities, and residents along Commercial Drive that the area is far better known as “The Drive” than by the civic boundaries. The district is one of Vancouver’s Business Improvement Areas (BIA).

The district is served by many different bus routes, as well as both the SkyTrain’s Expo Line and Millennium Line at Commercial–Broadway Station.

Commercial Drive is a mixed residential-commercial area with a high proportion of ethnic and vegetarian restaurants, businesses, and public housing. The area has low property prices compared to the westside of Vancouver, yet has good city services and is a local transit hub. It has been the destination for generations of immigrants to Vancouver and has significant Italian, Asian, Latin America, East Indian, and African communities. As of the Canada 2001 Census, English is a minority language in Grandview-Woodland, though still the most common.

Commercial Drive has a large number of local ethnic stores and community groups, Edwardian-style heritage buildings, European-style cafes, bars, and alternative shops and entertainment venues. As of late August 2007, there are 93 restaurants on Commercial Drive between Venables and Broadway, of which 19 are coffee bars.

It is home to an active street festival culture; notable annual events include the Vancouver Dyke March in August and the Parade of the Lost Souls in October. It also plays host to Vancouver’s only queer spoken word and musician performance night, Unsweetened (and Outspoken). The Drive is a popular place for Vancouverites who want to experience a safe version of North American counter-culture.

The customer was broken into in East Vancouver Commerical Area. The burglars just kicked the door in. Very common Break and Enter in Vancouver. You can see the door was broken and the cheap Off-Shore deadbolt just failed. Unfortunately, too many of these inexpensive deadbolts ($10-$45) are installed in Vancouver, sometimes on new condos and new buildings. 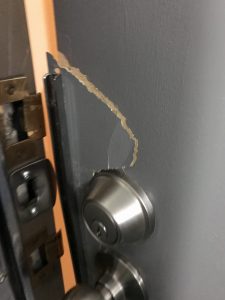 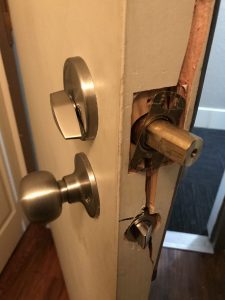 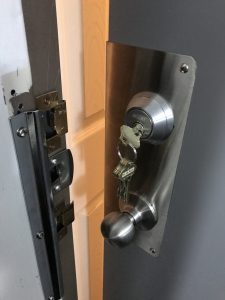